What is a Condensing Boiler and Why Should I Care?

These days, when shopping around for a new boiler, the term “condensing” is probably one you see often. So what exactly is a condensing boiler? In short, it is a boiler designed to increase fuel efficiency and reduce wasted energy by reclaiming some of the energy that goes up the chimney.

When your boiler burns natural gas, carbon dioxide and water vapor are created as a by-product of the burning, or combustion process. In total, about 10% of the fuel’s energy is tied up as water vapor. In a standard non-condensing boiler, that water vapor, along with the carbon dioxide, exits through the chimney, essentially becoming wasted energy.

A condensing boiler uses not just  the heat from the combustion of natural gas, but also from this otherwise unused energy. Inside a condensing boiler, the vapor is converted back into water droplets, which surround the heat exchanger, which in turn extracts the heat and converts it into additional heating energy. This water, along with acidic byproducts of the fuel combustion process, are then drained out of the boiler and into a neutralizer.

How Do Condensing Boilers Work? 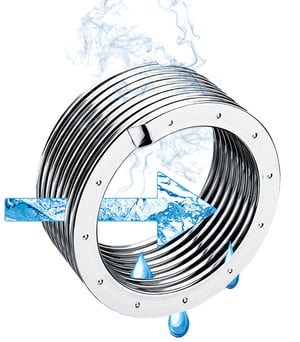 The heat exchanger in a Viessmann Vitodens boiler is shaped like a spring, but with flat tubes coiled together. Each coil is spaced precisely 0.8 mm apart thanks to small embossed pins, which look like small dimples. The water vapor created by the natural gas burning in the boiler is condensed, collecting along the outside of the heat exchanger coils, and drips through the spaces in the coil down to a small drain. By condensing the water vapor, the heat recovered is fed back into the heating system, reducing the heat wasted up the chimney (or out the vents), as well as reducing the fuel required to heat the water being drawn into the boiler. 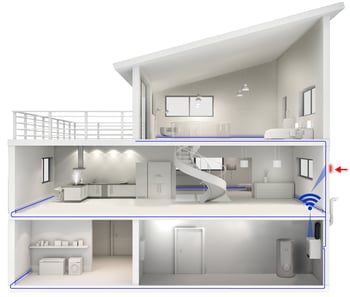 system. To achieve this, a condensing boiler  heats water to a lower temperature initially (which saves fuel), then strategically cycles it through the house to utilize the heat in as many places as possible for the lowest potential return temperature.